How long have you worked for RSD — where and in what roles?

I started at RSD as a student teacher in the 2005-06 school year. I spent part of the year at Obsidian Middle School and the other part at Redmond High School. I was then hired as a long-term substitute in the social studies department at Redmond High School for the 2006-07 school year and officially hired at RHS starting the 2007-08 school year. When I was hired for the 2007-08 school year, I taught social studies, integrated math and health classes. In the 2009-2010 school year I was transferred to Elton Gregory Middle School where I taught one year of self-contained 6th grade and another year of 7th and 8th grade social studies. In the 2011-12 school year I was transferred to Hugh Hartman to teach social studies at our all-freshman campus (which was technically part of Redmond High School). Then in 2012-13, I moved back to Redmond High School and taught social studies. In 2014-15 I became the cheer coach at Redmond High School and continue to be in that role today. Since 2016-17, I have taught AP US History at RHS and various other social studies classes. In 2020-2021, I also became the activities director/leadership teacher at RHS and still do that today. I have been a mentor teacher for new employees several times including this year, I have served on many different leadership teams at both the district and school level and am currently also part of the AVID leader team here at RHS. I am currently the social studies department head, a position I just took back over starting the 2020-21 school year (I was also the department head previously, but I honestly can’t remember which years) I have been the Key Club adviser, a Class adviser, and Panther Den adviser – but currently I am not any of those things. (well, maybe the Panther Den, but I haven’t gotten it running again since COVID).

What made you want to be a teacher? You returned to school to earn your degree later in life — what sparked that passion and how has it worked out for you? Why social studies?

I returned to college when my youngest child entered kindergarten. I was 30 years old. I had always wanted to be a teacher — I come from a family of teachers — but I married young and moved out of the state for my husband’s job. Once we were back in Oregon, I continued my education and became a teacher, with the sole purpose of teaching the youth of Redmond. I fell in love with our community early on and knew I wanted to serve in a way that played to my strengths. I have always enjoyed mentoring teenagers and knew this is the path I was meant to take. I originally thought I would become a language arts teacher, as I love to read and write, but discovered in college that history was in fact a better fit for me as it included reading, writing and content which really interested me.

What is your favorite part of your job?

The favorite part of my job is working with teenagers, who are on the cusp of adulthood. It’s a very exciting time in their lives and I am so grateful to be a small part of it.

What is the biggest challenge of your job?

The biggest challenge of my job is witnessing teenagers make poor decisions and helping them learn from those mistakes.

You are very involved in extracurriculars at RHS as well — what about that appeals to you and why do you do it?

I love, love, love being part of these kids’ lives outside of academics! Being a cheer coach and leadership adviser has allowed me to serve these kids in ways the classroom doesn’t support. In many ways, these roles have inspired me just as much as I hope to have inspired the kids.

The culture of Redmond School District is one I am proud to be a part of, because it feels like a family. The cohesion and vision of this group of educators is reflective of the values our Redmond community holds, which is important to me both as a teacher and parent.

Tell us about yourself and your family.

I have been married to Michael Baumgartner for 32 years, and both our children, Justin and Jessica, were educated in Redmond and graduated from Redmond High School.

“It is apparent when you first meet Cindy that her commitment to students is genuine and compassionate. She puts in countless hours both in and out of the classroom, preparing her students in whatever arena it is in which she finds herself as leader. In the classroom, her students know exactly what to expect and they feel compelled to do well. Students have said the following about her: ‘She’s respectable and kind to students. She makes us work hard, but we don’t mind.’ And ‘She treats us like adults and expects great things from us. We rise to that expectation and do better because of her.’
Regardless of the content she is teaching, Cindy is an expert in her subject area and she can stretch her students to do more. She believes all of her students can grow, and they in turn believe it too! She is also our cheerleading sponsor, and has led our teams to their highest achievements in RHS history at the state level.”
— Audrey Haugan, Principal of Redmond High School

“Cindy is the type of person everyone wants on their team. She is committed to her students and the community of Redmond as a whole as reflected in the countless hours she spends as a teacher, leadership adviser and cheerleading coach. Cindy builds positive relationships with her students and strives to create an environment where all students are challenged academically, socially accepted, and can feel successful in their education. She works to give students the best possible high school experience through planning of fun, culture-building activities such as football tailgates, spirit weeks, and assemblies. Cindy has built her cheer program to be one of the top in the state, bringing home state trophies and developing all-state caliber cheerleaders. Cindy does much more than make time for our students, she truly invests in them!”
— Doug Taylor, RHS Assistant Principal & Athletic Director 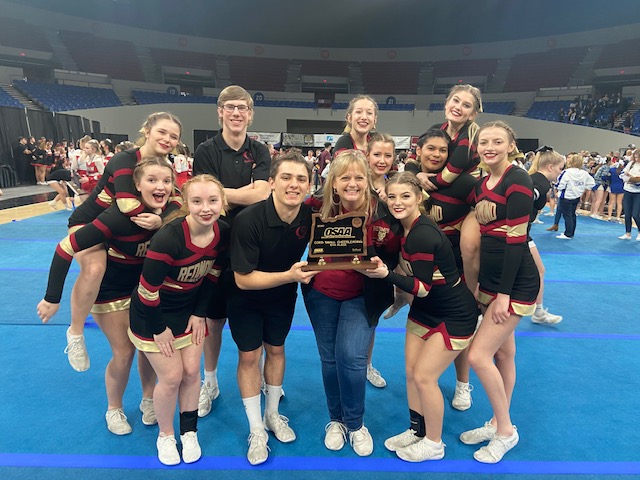